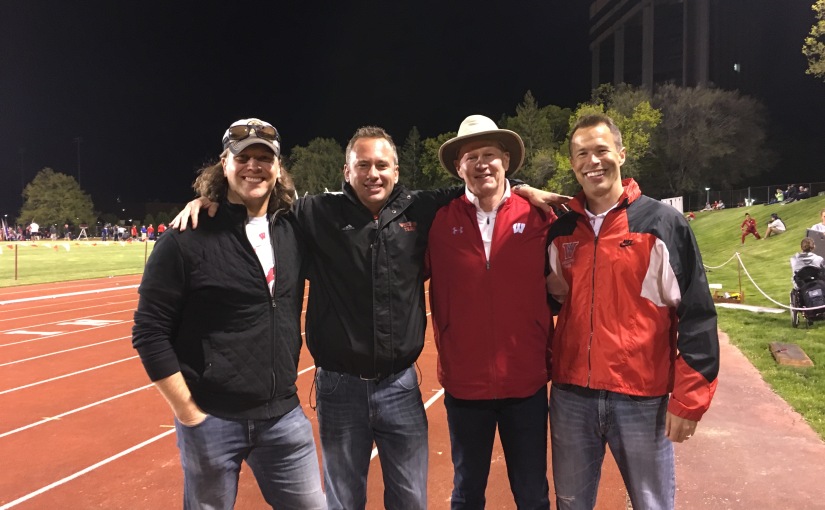 Even 22 years after graduation I have not found a school I would rather have attended than the University of Wisconsin. There is no other town like Madison. And no other culture like the University and its work-hard, play-hard, jump-around-hard students and alumni.

In college I double majored in Psychology and Journalism. I think I also set some sort of school record for most bars and parties attended without drinking alcohol.

When I wasn’t studenting I was a proud member of Wisconsin’s Men’s Track & Field team. I threw the discus, the hammer, the 35-pound weight, and the occasional hissy fit.

Every fall, the track year would kick off with a mandatory team meeting in an auditorium in the athletic center. We had to fill out various forms in order to be cleared to participate. It was more businessy than athleticy. But it signaled the start of the season, and it was the first time the team assembled each school year.

My favorite part of the meeting was when our head coach, Ed Nuttycombe, addressed the team. When I joined the program, Nutty had already won several Big Ten championships. By the time he retired in 2013, he had amassed 26 Big Ten titles, more than any other coach, in any sport in Big Ten history. I was proud to be part of that history, as our team swept the Big Ten Cross Country, Indoor and Outdoor track titles both my junior and senior years.

There was one part of this annual meeting I will never forget. Nutty always made a strong point about his expectations of our priorities. He said:

‘Gentlemen, as a member of this team, always remember that academics come first. You are a student at the University of Wisconsin first. Track & Field comes second. Let me be absolutely clear about that. But if you want to be on this team, track better be so close behind your school work that you can barely tell a difference. Academics are priority 1. Track and Field is priority 1A.’     -Ed Nuttycombe

I remember being surprised the first time I heard this speech. I thought he was going to say academics are always the priority. Athletics come second. But that’s not the Nutty way. In his world, if you can’t fully dedicate yourself to both high academic and athletic achievement, then you don’t belong on his team. That was a badass statement. And we all felt badass for living up to his standards.

Last Friday, Nutty was inducted into the University of Wisconsin Athletic Hall of Fame. And with great reason. But I would also induct Nutty into the Prioritizing Hall of Fame for the way he pushed us to achieve great things in multiple areas of our lives. My teammates were impressive on the track, in the field and in the classroom. But I am just as proud of all the successes my teammates are having today in their careers, and as husbands and fathers.

I carry on Nutty’s dual commitment today to my family and my work. I don’t think about balancing the two. I think about prioritizing them both. I must succeed at both. There is no way around it. There are no shortcuts to take. There are no excuses. That’s what Nutty taught me. And just look at his track record. #PunIntended

3 thoughts on “How to balance your priorities like a student athlete.”