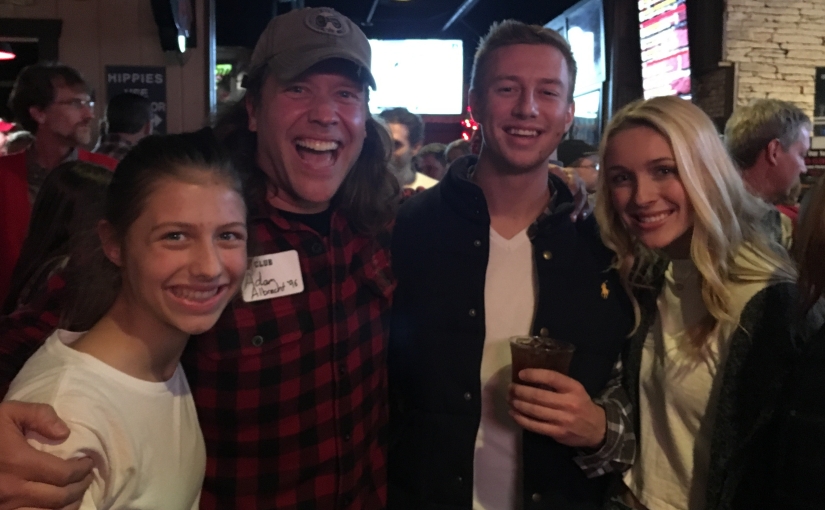 One of my favorite games to play is Connect The Dots. Not the game we played when we were kids, where you drew lines between numbered dots to form an image of a kitty or  Jack-In-A-Box. The version I like to play is with humans.

It’s pretty simple. When you meet someone new, you try to discover their dots and connect them to your own. This helps build a bridge or a common bond between two people. Note, I use the term ‘dots’ symbolically to represent someone’s key facts, personal history, experiences and friendships. I don’t usually draw lines connecting someones moles and freckles. Although I am not above it.

Two weeks ago, after watching our local high school win a state championship at Camp Randall Stadium in Madison, Wisconsin, my daughter Ava and I attended a UW Madison track and cross-country reunion hosted by The National W Club. There were over 200 alumni gathered on the eve of the NCAA Cross Country National Championships in Madison. I saw dozens of former teammates and friends. But I also met new people. And we played Connect The Dots.

A Young Couple Walks Into A Bar…

Ava and I were standing near the entrance to the bar, when a nice looking young couple walked in. I recognized the woman immediately as Taylor Amann, a recent UW graduate and an All-American pole vaulter from Arrowhead High School in Hartland, Wisconsin.

I had connected with Taylor in the spring, after I saw her LinkedIn profile and recognized that I may be able to assist her with some career connections based on her interest in fashion and retail.

We had exchanged a few emails, but had never met in person. So I approached her and introduced myself. Taylor was very nice, and acted as if she totally remembered our email exchange. She talked about her great new job as a buyer at the UW Bookstore. We talked about the interesting challenges of transitioning from college to the real world, and discovering our new identities after the end of our athletic careers.

Then I started talking to her boyfriend. And that’s where things got really interesting. His name was Clay. And since we had never emailed each other before, I started playing Connect The Dots.

I asked him where he was from. He said Ohio. This was a very good start. Because Ohio is dot-rich territory for me. I asked Clay where he went to college. I learned that he was a recent graduated from Ohio State, where he also played football.

At this point I knew we would have at least 2 connections. Because my friend Mike Ulring is the principal at Coffman High School. And I figured that Ava’s former babysitter, Rachel Weber, would have been in high school with Clay.

But I kept asking questions.

I asked, ‘Where did you go to Middle School.’ He said. ‘Karrer.’ That was the school our neighborhood went to, not far from where we lived in Dublin. So I told Clay that we lived across from Avery Park, in Hawks Nest subdivision. His eyes got wide and he said, ‘The stone that says Hawks Nest on it was in my yard!’ I asked, ‘Did you live on Jacana Drive.’ He said, ‘Yes!’  I said, ‘I have been on your roof!’

It turns out Clay Raterman and I lived 3 houses apart. And as soon as we connected the dots I knew exactly who he was. Not only did he remember me, he remembered Ava as a little girl who was always playing outside. We talked about our neighbors the Philbins, Sherbuns, McGoverns and Ashs. We recounted a legendary neighborhood story about Clay and his brother who ding-dong-ditched our next door neighbors, who found little humor in the prank. (The boys had painted a marshmallow to look like dog poop and left it in an unlit bag on the porch).

We also talked about the time when hurricane Ike hit Columbus and took part of the roof off of Clay’s family’s home. Mike Sherbun and I climbed on the roof to nail down a large corner section that had been blown off by the wind. We scrambled to cover the section with a tarp donated by my neighbor, Phil Turner, before nightfall came, and rain wreaked havoc on the exposed home.

Two ships in the night.

Clay and I may have spent the evening within feet of each other and never talked. Or we could have said a pleasant hello and left it at that. We would have had no idea just how much we had in common, and how many people and places we both knew. We talked about Donatos Pizza and Jeni’s Ice Cream and other favorites Columbus originals.

There is something wonderful about discovering our common bonds. It makes us feel connected. It makes us feel like someone else knows us and understands us. Networking is nothing more than building your own safety net. When I play connect the dots, I am trying to make each of our nets a little bigger, and a little stronger.

Get to know as many people as you can. Discover your common ground. We all have it. It’s just a matter of whether or not we find it. Turn strangers into friend. Make the world feel smaller and friendlier. You never know who you may be able to help along the way. Or who may be able to help you when you need it most. Like when a hurricane hits central Ohio, and dark is closing in. Or when you are a Buckeye, and you walk into a bar full of Badgers.

7 thoughts on “What happens when you start asking a total stranger all the right questions?”