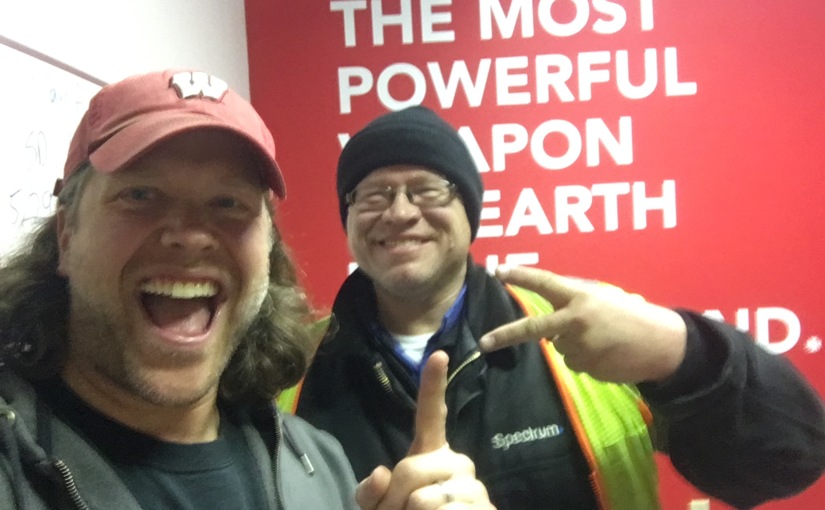 Chances are that whatever you were doing it wasn’t very stressful. Because as Saturdays go, the Saturday night of Thanksgiving weekend is about as relaxing and as far from work as most people get.

Working For the Weekend

Last night I was at work.

Not working from home. Not catching up on emails or sending witty-but-heartfelt holiday notes to clients. I was in the office, downtown Milwaukee, taking care of real business issues.

Last Tuesday afternoon the wi-fi at the Milwaukee office of The Weaponry, the advertising and idea agency I launched in 2016, was not properly wi-ing or fi-ing. It made for a frustrating afternoon. Wednesday morning was no better. So I called our internet provider and spent an hour and a half trying to get things fixed. But no dice. And no wi-fi.

They internet company (what our forefathers and foremothers used to call the cable company, or the phone company) couldn’t get anyone over to fix our issue last Wednesday. But they could get someone over on Thursday afternoon, right during my Thanksgiving meal. I had to turn that time slot down or I may have been the turkey on the table at the Thanksgiving feast at my house.

I asked what the earliest available appointment was on Monday. They told me they didn’t have a business appointment opening until Thursday, December 5th!

That just wouldn’t work. We are an incredibly busy business and need to be fully operational Monday morning. In the 2000s, internet access is as core to an advertising agency’s operations as Martinis were in the 1960s, marijuana in the 1970s, cocaine in the 1980s, Prozac and flannel in the 1990s, and coffee in the 2000s.

I asked the internet company’s scheduler, ‘Do you have any openings over the weekend?’ He replied that they had options on Saturday. Because nobody is actually working on the Saturday of Thanksgiving weekend. I was scheduled to be out of town on Saturday, so I asked for the latest possible appointment. Which was actually later than I expected.

Driving back through the woods and over the river.

I rearranged my plans to drive home 3 hours from visiting family in Central Wisconsin. It snowed, sleeted or rained the whole way. I got home and dropped off my family. The Wisconsin vs Minnesota football game was on TV, but I had to DVR it, and avoid social media and texts to avoid spoiling the result. I then drove 30 minutes to the office, by myself, through cold, blowing sheets of rain, on a Saturday night, during a holiday weekend.

And I couldn’t have been happier.

When I became an entrepreneur I signed up to do the hard things. I declared that I would take on anything and everything that needed to be done to make my business work. I had always dreamed of creating my own ad agency. I would work nights, weekends, holidays, or on my birthday to make the business successful.

I had to go in on Saturday night. We have 18 clients counting on us to deliver. We have loads of work to create. We have major projects due in December. We have new businesses requesting proposals. The demand for our thinking is high. Like a lumberjack must have a hearty breakfast, we must have robust internet access!

I met Rick, the Internet Magic Man, in the dark, rainy parking lot in front of my building. We went up to the office together. We were the only humans in the whole building. He got to work on our internet issue. I sat down at my desk and got busy with work due this week.

Within an hour Rick had the problem diagnosed, installed a replacement doohickey (we needed a new modem), and the wi-fi came flooding through my computer. You could practically hear the business roar back to life. All was right with the world. This business that I am responsible for once again had all it needed to make magic happen. And I had another example of the things you have to be prepared to do when you are an entrepreneur.

There is nothing better than living into your own dreams. The demands, the time commitment, the menial jobs, and the hoops you jump through are all worth it when you know you are doing what you always wanted to do. When you are living into your vision for your own life a holiday weekend trip into the office is a small price to pay. Because there are things worse than sacrifice. Like not having anything worth sacrificing for.

3 thoughts on “Where were you Saturday night?”