When I first started my entrepreneurial adventure I did it with a partner. My cousin Brooks Albrecht and I teamed up to put our complementary skillsets together to create The Weaponry out of dust. We were like Wonder Twins. Except we were cousins. And our superpowers went beyond transforming ourselves into water-forms and monkeys.

Brooks and I didn’t just divide and conquer responsibilities. We filled in our respective weaknesses with the other person’s strengths. Between the two of us, there was nothing that we weren’t excited to do. Which meant we made quick progress on all fronts. Or should I say, Albrecht fronts? (I shouldn’t.)

1. We motivated each other. The progress made by one of us inspired the other to make the next great leap forward. We were like foragers showing up each day to present the mushrooms, berries and the Wilson volleyball we had gathered. It made the other person want to do more of the same to show value.

2. It made the whole process fun. The work didn’t feel like work. It felt like a really fun elective project I took on with a teammate. Which is exactly what it was.

3. When you have a partner you feel a sense of responsibility for getting your work done. You can’t take a day off, or say, I’ll think about doing this later. The accountability you feel to each other helps keep you moving forward, like a black hole. Only without that uncomfortable crushing feeling at the end.

4. You feel like you have a strategic sounding board for every decision. Entrepreneurship, like so much of life, can be very isolating. Having a partner to evaluate your strategy, structure, investments, and hires improves your confidence that you are making the right decisions before you set them in stone. Like Sharon.

5. You have someone to take the lead when you need a moment to rest or slow down. Like running or biking on a windy day, creating a new business, or other organization, feels like you are always running against the wind, Bob Seger-style. There is a constant resistance from the unknown and unstructured. It is nice to be able to duck behind someone else occasionally and get a brief reprieve from the wind. Quack.

If you can find a partner to take on a major initiative with, do it. There is nothing quite like the team-feel to fuel your progress. Partners push, inspire, excite and balance you. They neutralize your weaknesses. They enable you to focus on your strengths. And they can afford you a moment of rest when you really need it. Plus, you have someone else to laugh with along the way. Which, in my experience, is the best part of all.

Today, May 25th, is my birthday. I consider my birthday the most important day of my life. Seriously. If it wasn’t for my birthday I doubt I’d have a wedding anniversary. Or kids. Or my birthday suit. Or a blog.

I think of my birthday, not New Year’s Day, as the starting point of my year. And this year I am focused on some very important goals. Or as a Mexican soccer announcer would say, I have some ‘Muy Importante Gooooooooooals!’

My 5 Goals For The Next Year

1. Get More Aggressive.  Recently I’ve done more leaping and less looking. I’ve taken several premature steps forward on initiatives rather than taking the time to properly prepare, and consider all of the possible outcomes. The results have been impressive. By simply moving forward when I get an inkling I am creating more progress than I do when I carefully consider my options. So in the year ahead, less thinking. More doing. Or as Toby Keith said, a little less talk and a lot more action.

2. Write more.  I already write like I am Orville and Wilbur’s third brother. But in the year ahead I have goals to crank my typewriter up to 11. In addition to this blog that I post to 3 times per week, I now have 3 book ideas started. I also met with a couple of magazine publishers yesterday about writing a regular piece for their pub. (That’s slang for publication. I am not writing for an Irish bar.) How did this opportunity come about?  I got aggressive and contacted them on an impulse, before I really thought it through. (See Goal #1)

3. Create Another Business. There is something about entrepreneurship that is like Pringles. Because once you pop, you can’t stop. I have 3 leading business ideas I am currently working through. One involves cheese. (#WhenInWisconsin…) One is a franchise opportunity (not to be confused with a french fry opportunity). And the other involves fo real estate. (#forealdo). Of course I have other ideas that get added to the list daily. So I want to bring at least one of the ideas to life in the next year. But no matter which one wins, I want to eat more cheese.

4. Become A Greater Connector. I am a dot connector. It is how I process the world. I love creating, maintaining and facilitating connections. This is my most meaningful contribution to the people in my circles. Because at the end of our days the only thing that really matters is the impact we have on each other’s lives. Wait, did that just get real serious, real fast? #crickets

5. More Quality Time With Family. I put my family at the top of the list of people I want to connect with. Like the meatball on top of spaghetti. My family includes my wife, Dawn and children Ava, Johann and Magnus. But it also includes my parents, sisters and their families. As well as my very large extended family. Especially now that I am about to make my first lap around the sun without any grandparents. Which means my generation needs to prioritize and facilitate our gatherings now that my 4 grandparents are sitting together at the great card table in the sky.

Birthdays are important. They serve as an annual reminder of the scarcity of time. To make the most of each year, reevaluate what is most important to you on your birthday. Set new and higher goals and expectations. Then charge forward to meet them. It’s how we create a life worth writing about. Which, if I’m lucky, would be book number 4.

If you want to do me a special free favor on my birthday, please subscribe to get this blog gift wrapped and delivered to your inbox. It would really mean a lot to me. The subscribe button is on the home page.

*Also, Happy Birthday to my sister Heather. Yes we share a birthday. No we’re not twins. #howweirdisthat 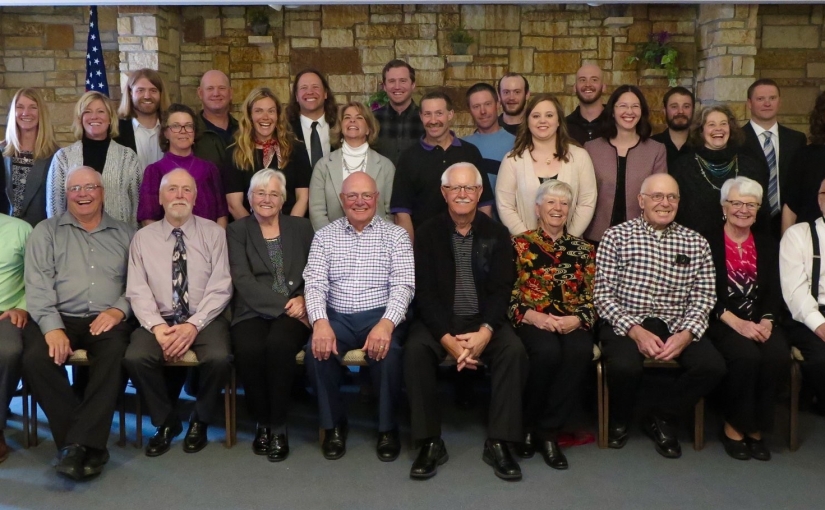 The greatest asset you can ever create is a strong personal network. That’s why I invest so much time and energy in developing and maintaining my personal relationships. As a result I have an tremendous network of friends around the world. But I am also the beneficiary of what Warren Buffet calls The Ovarian Lottery. Because on the day I was born I was instantly a member of a remarkable network. Despite the fact that I hadn’t done anything to deserve it.

My Grandmother, Judith (Benzel) Albrecht was born in 1919, in New Ulm, Minnesota. God blessed her with a sharp mind and unrelenting determination that would have gained her admission to an elite business school had she been born a century later. She spoke German as her first language.

Following high school graduation she was a valuable asset to a local startup, the phone company. Because she could speak both German and English fluently, she could serve as the middle-woman, literally connecting callers in the heavily German area of southern Minnesota.

In 1940, at 21 years old, she married my grandpa, Alton Albrecht. Together they thrived. They began farming. They began a family. And they began traveling together. It was an adventure that would last more than 66 years.

On April 15th, 2019, while I was on vacation in Texas, I got a text message from my father, Robert, that Grandma Albrecht had passed away. She was 99 years and 7 months old. A funny thing happened when I got the news. There was a moment of sadness. But that moment soon transitioned to awe at the closing of an amazing story of an amazing woman’s life.

In the wake of Grandma Albrecht’s passing, my family and I started calculating the inheritance that Grandma left for us. My Grandma and Grandpa Albrecht had been farmers in Minnesota. Early on they recognized the value of accumulating assets, and knew a good opportunity when they saw it. As a result, the 2 of them bought the Albrecht Family Farm from my great grandparents. Not long after, they found another good opportunity, and purchased another farm. And then another. And then another.

They amassed significant real estate holdings, which provided income for decades. As they eventually sold their farms and invested the proceeds they developed a significant nest egg. My Grandpa Alton died in 2006, having battled with Parkinson’s disease for 8 years. Grandma Judy kept marching, right to the doorstep of 100 years.

Over the past 2 weeks everyone in the Albrecht family has been buzzing about just how much Grandma Judy left us when she died. We have been scribbling figures on paper. We have been punching numbers into the calculators on our phones.

However, the numbers we have all been crunching are not measured in dollar and cents. Because the most valuable assets Grandma Judy left us are people. They are the members of our ever growing family she started back in 1940. As we tallied up the descendants of this grand matriarch this is what we found:

That is a total of 77 descendants, represented by 5 generations. When she passed away she had 7 children in their 70s. Those 77 relatives are in Minnesota, Wisconsin, Indiana, New Jersey, Florida, Texas, Arizona and Nevada.

Not only are we a large family, we are a close family. We enjoy being around each other. And we make an effort to spend time together. In fact, in June about 80 family members will gather in Estes Park, Colorado for a week long reunion, as we do every 5 years. We will all stay in one cabin and enjoy daily meals, activities and adventures, and nightly festivities together. Just like Grandma Albrecht taught us.

My large family is one of my most valuable assets. It is an ever-present support system, a cheering section, an army of role models, and constant source of humor. It provides each and every one of us with an unfair competitive advantage in life.

My large family also played a major factor in my entrepreneurial journey. I saw the entrepreneurial spirit in my grandparents as they accumulated assets and ran their own farms. Five of my Albrecht Uncles were dairy farmers. And dairy farming is the epitome of entrepreneurship.

Several years ago my cousin Brooks Albrecht and I began talking about starting a business together. In 2015 the conditions were right, and Brooks and I started planning  our own advertising agency. Despite the fact that I was in Atlanta and Brooks was in Seattle, we worked together perfectly. Like family. Like Grandma Judy taught us. By the spring of 2016 the Albrecht cousins launched The Weaponry like the Wright Brothers launched the first airplane: on a wing, a prayer, a great plan and a familial bond.

As the Albrecht Family gathered yesterday to celebrate the remarkable life of my Grandma Judy, I marveled at all she created. Being an Albrecht has always been a source of great pride for me. This large family has given me love, support and encouragement. It has offered me a sense of belonging to something significant. It has been critical to my entrepreneurial success. And it has provided a lifetime of laughs. Thanks you, Grandma.